As the company who implemented the system – SolarBK had collaborated with EVN representatives and the High Command of Navy on inspecting the entirety of the system as well as producing report on the inspection. SolarBK also completed the hand-over procedure of the wind – powered and solar-powered electrical system on the Spratly Islands.

Within the framework of the hand-over ceremony, the High Command of Navy awarded six SolarBK engineers the Honorable Soldier of Spratly Islands Medal. It is a privilege as well as a prestige for the young SolarBK engineers of their enduring work within 10 years developing and maintaining the solar-powered electrical system on these islands.

The wind-powered and solar-powered electrical system currently presented on 33 islands and 15 off-shore rigs has contributed to the pursuance of bringing artificial lighting and clean water to the people living on these far-away islands. It also reinforces soldiers whose duty is to protect our sea and islands sovereignty as well as national continental shelf privileges. 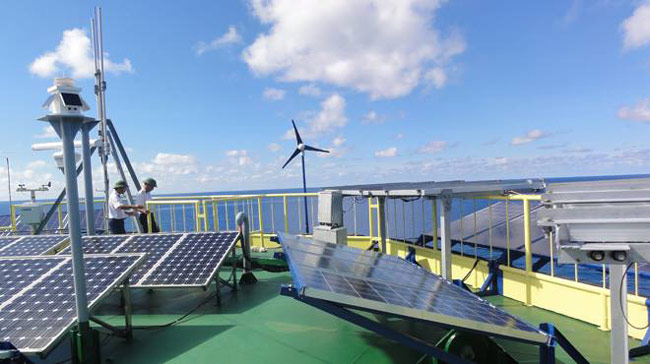 10 years ago, SolarBK was honored to have been selected as the solution-provider for the solar-powered electrical and lighting system on the Spratly Islands. Despite the fact that it had only been established for 2 years, the team of engineers from Bach Khoa University had had over 30 years of technical experiences. At that period, there are multiple foreign companies that could provide competitive solar-powered panel products. However, the High Command of Navy had, based on many criteria, chosen SolarBK as their partner to initiate the solar-powered electrical system. 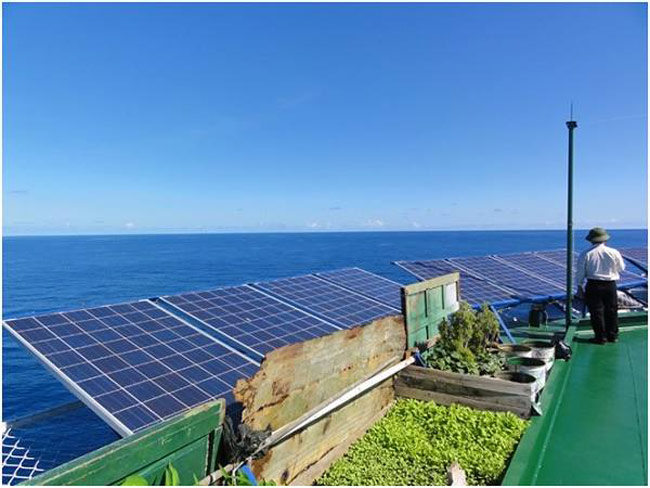 Our emphasis on R&D from day one has added onto many reasons for the High Command of Navy to believe in our professional capacity as well as our seriousness and extensive pursuit in renewable energy. In those days, market for renewable energy system was relatively new, most of domestic companies had to depend on foreign technology and products. Meanwhile, the maintenance period of those systems was too long and so, choosing partner from the very start was to be careful. Specific to national military defense, “confidential” aspect is highly regarded. Therefore, prioritized criterion to be the providing partner is being a native Vietnamese company whom actively controls the technology and resources. Those are SolarBK advantages compared to our competitors as well as our advantage of selling both solar-powered panels and solar-powered water heater. Our board of directors had strategically invested in researching solution, pioneering technology in the world. The mentioned above are reasons that differentiates SolarBK as a solution-providing company. It has earned SolarBK the credibility to provide solar-powered electrical system for a huge project with the total capacity reaching 1MWp on Spratly Islands.

10-years journey with the solar-powered electrical system on Spratly Islands.

From the very first day of implementation, SolarBK engineers knew that this is going to be an enduring journey but nevertheless, it is worthwhile. This is not only a huge project scattering on many islands but it also contributes to the mission to ensure national sovereignty.

From the long journey on the sea to the implementation of the system under climatically and geographically harsh conditions. It required both physical and mental fitness from the engineers to ensure strict technical and progression requirement upon completion. 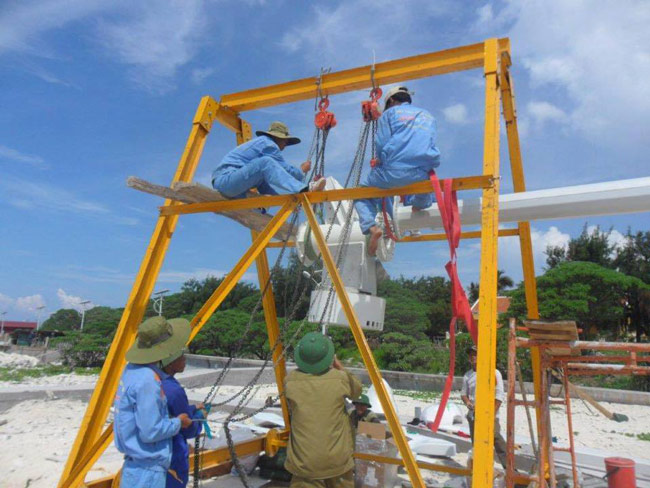 In rainy season, rainfall is recorded to be up to 2.500 milliliters. Also, twisters and whirlwinds around the year hinders transportation and construction processes. In addition, large trucks to facilitate transporting equipment only available on main islands. Therefore, solar panels, welding machineries and electric generators from large vessels had to be moved to smaller ones in order to be transported to smaller islands. Equipment arrived at smaller islands had to be transported by tow vehicle to the assembly point. Some islands have forbidding terrain so transportation had to be carried out by human effort.

Mr. Vu, Nguyen Be – Technical support specialist from SolarBK, shared his difficult time on the construction site: Transporting equipment on the sea under heavy waves condition proved to be as challenging as working under scorching sun and gusty wind in land. SolarBK engineers even had to work at night to guarantee operation progress. 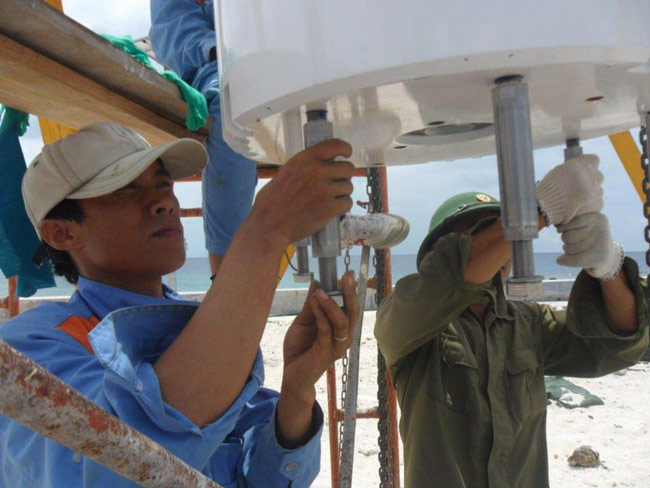 After all the hard-working days, the result had made so-called “soldier without army rank” from SolarBK proud as ever. Those “soldier without army rank” had overcome poor infrastructure and unforgiving natural conditions to complete their mission, to bring electric light to these islands. After 2 years, the entirety of Spratly Islands especially roads along the coastlines had been lit, which significantly facilitates soldiers on those islands to perform their duty, to protect our national sovereignty.

Furthermore, after the project was done, the engineers of SolarBK are still regularly performing check-ups and maintenance on the installed system. The Solar-powered electrical system is still functioning at the highest efficiency under harsh off-shore condition and that is the prove for our service excellency. It has secured a sustainable source of energy for civilians as well as military man on those islands.

SolarBK has met the expectation of civilian and military man on those islands. There are projects on 9 floating islands, 24 submerged islands ,15 DK off-shore rigs and a total of 21 post-guards on Spratly Islands that are scheduled to be completed in 2010. With over 5700 solar panels, 130 wind turbines, 1000 LED lightings and a signal cable system along with other accessories, the system produced 155MWh/month, meeting a 24/24 demand for all people on the islands. 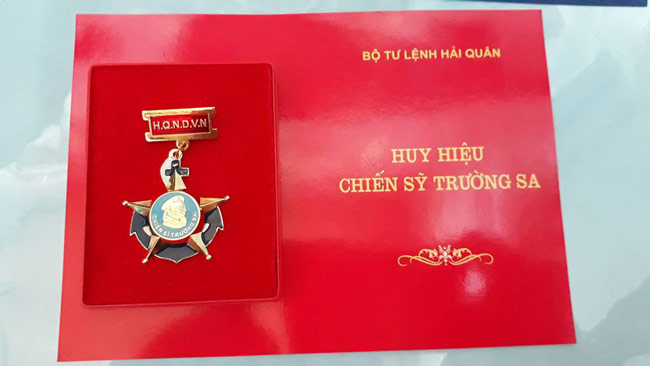 Mr. Phúc, Phan Hồng – Deputy of the coordinator team working on SolarBK project is one of the first-comers to arrive on the Spratly Islands. He nostalgically shared the dedication of SolaBK team as well as those of engineers who work directly on the construction site. They are vivid memories that he held to this very day. The rigs are surrounded by endless sea in all directions, sợ to be able to weld the frame on to the rigs or move solar panels up in the rigs in order to complete the solar-powered system, it is an incredible feat! 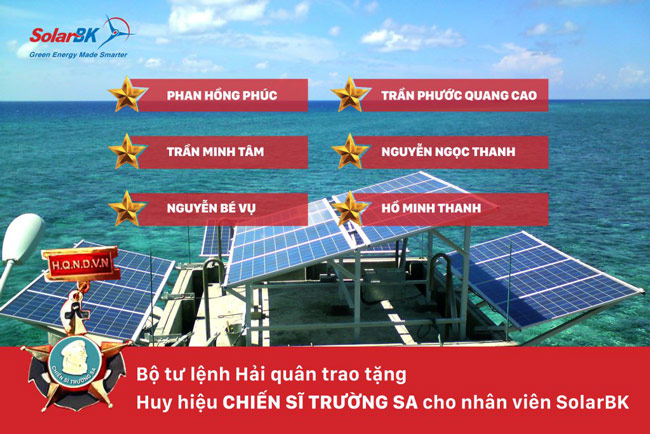 Recognize the silent contribution of those “soldier without army rank”. Six engineers from SolarBK has been awarded Honorable Soldier of Spratly Islands medal for their prolonged years working on the islands.

On behalf of those who received Honorable Soldier of Spratly Islands medal, Mr. Thanh, Minh Ho expressed his gratitude: It is my utmost honor to receive the Honorable Soldier of Spratly Islands medal, we understand that this isn’t just a recognition from the High Command of Navy for our time and devotion to this place, this is also our responsibilities of being a soldier to obey order at any given moments. On such spirit, I acknowledge that the electric system initiated by SolarBK must always be maintained, working to light up every corner of our nation.

Earth Hour 2017: One hour lights off, a future turned on

Earth Hour is a worldwide movement organized by the World Wildlife Fund (WWF). It was started as a lights-off event in Australia ...